It has been 30 years since the first short message was sent. A lot has happened since then – and the short message is still popular. Whether you are a private person or a company: We show how you can benefit from SMS. “Merry Christmas”: This simple message went down in history as the first […]

It has been 30 years since the first short message was sent. A lot has happened since then – and the short message is still popular. Whether you are a private person or a company: We show how you can benefit from SMS.

“Merry Christmas”: This simple message went down in history as the first SMS on 3 December 1992. It was sent by the British engineer and developer Neil Papworth, then an employee of the Sema Group, from his PC. The recipient was the mobile phone of Vodafone employee Richard Jarvis, who was enjoying himself at the company Christmas party. And almost 30 years later, this first SMS in the world was auctioned off as a “Non Fungible Token” (NFT) for around 107,000 euros (read more: Merry Christmas: World’s First SMS Auctioned for 107’000 Euros).

How SMS came into being

The communication revolution was made possible by the introduction of the GSM standard (Global System for Mobile Communications). The standard enables data transmission in fully digital mobile networks, including short text messages. The first efforts in this direction were already made in the 1980s. At that time, Matti Makkonen from Finland proposed to make better use of the capacities of the mobile radio network and to enable protected communication. Accordingly, an international working group adopted a first concept in December 1982. In it, it demanded that the services and facilities offered in the public telephone networks and public data networks should also be available in the mobile radio system. At the beginning of 1989, the first version of the GSM standard was adopted, enabling a short message service. The short messages were to have a maximum length of 160 characters, which corresponded to the character length of postcards and telexes.

Instant communication in short format quickly proved to be a success. Private individuals and companies recognised the advantages of the new form of communication. Anyone who wanted to send a message quickly, efficiently and almost without disruption did so by SMS. Along with the rapid spread of the mobile phone, the reach of the new medium also grew. Especially in the area of business messaging, new fields of communication emerged with which companies could increase their own efficiency and optimise communication with customers.

Short messaging services received competition from messaging services such as WhatsApp. Instead of using the fee-based telephone network, messaging apps allow users to send messages via wireless virtually free of charge – and above all without character limits. Even though SMS has been declared dead in the face of this competition, it is now more alive than ever. Many companies still rely on integrated SMS solutions. And not least because of data protection fears .

Versatile use: SMS for businesses

A lot has changed since “Merry Christmas”. Strictly speaking, the character limit still applies – but most modern phones and networks work with message chaining. This means that they split and concatenate messages in such a way that those writing and reading them do not notice the character limit. In addition, users rarely pay per SMS: mobile subscriptions with unlimited SMS have become the standard. Professional text messaging is widespread: Official institutions inform citizens by SMS, organisations and technical departments of a company rely on short messages for the internal alerting of emergency teams. Medical practices and service companies reduce costs with automated appointment reminders, and marketing departments conduct SMS campaigns. Almost every field of business benefits from SMS.

Like any technology, SMS has its downsides. Hackers can use short messages to elicit private data from recipients. Some providers use grey routing to redirect messages unnoticed. Nevertheless, if you know about these practices, you can prevent them. For example, by only using providers you trust. SMS is one of the most secure communication media. It is not for nothing that banks and insurance companies use SMS technology for two-factor authentication. Whether you are a private individual or a company, a customer or a provider: SMS makes our everyday lives easier.

Would you like to know how you too can benefit from the latest SMS solutions? We will be happy to show you. Contact us!

Florian is Senior Marketing Manager and responsible for promoting the eCall brand. In this blog he writes about news and things worth knowing about business messaging.

Cover picture: The first SMS was received on the mobile phone of a Vodafon employee on 3 December 1992 (© Vodafone/DPA).

Professional data protection and data security are of central importance today for companies as well as government organizations. The increasing security requirements prompt us as a Saas provider to make all necessary efforts and take all necessary precautions to ensure the highest level of data protection and data security. However, in addition to technical efforts […] 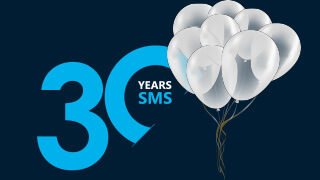 Take advantage of the anniversary offer: Valid on points purchases in the shop (prepaid) from 31 October to 31 December 2022.

To the anniversary offer

We Are Here for You.

Do you have any questions on eCall?
Then simply fill out the form below, and we will get back to you shortly.